I’m sure there is something more surreal than sitting in my jeans and t-shirt, on my sofa, with eggs and toast soldiers, watching the Co-op’s AGM. But it’s 2020, most of the world is either in lockdown or social distancing, and this was the only way to safely participate while not endangering those who needed to be there. The only people present were those who had to be there to do their jobs, and they were socially distanced. It was seriously weird to see the building with so few people in it; like seeing someone hit a drum but no sound come out.

Welcome and introduction
The meeting opened with the Chair of the Co-op, Allan Leighton, speaking from a room at home. As this was the first wholly-virtual AGM, he started by explaining how it would work. Some presentations had been recorded in advance, which is why our CEO spoke from his conservatory for his presentation, but from Angel Square for the Q&A. Most presenters were presenting wholly from home. Votes were cast according to members’ pre-submitted choices, with the exception of the 20 Co-op colleague members who had to be there to vote and to give the AGM a legal quorate. Questions were submitted either in advance or via the YouTube channel.

How the Co-op has helped communities through Covid 19, with CEO Steve Murrells.

CEO Steve Murrells, in his conservatory (I think) started by expressing his thanks to colleagues for their dedication, including thanks to Funeralcare for going the extra mile, with their coffin factory working 6 days a week. He also thanked the team who sourced PPE to keep colleagues safe.

The Co-op has recruited 5,000 new workers from the hospitality industry to help the Food business keep going. Colleagues who had worked for the Co-op prior to the pandemic were given a £150 bonus and a day’s extra leave. Steve also expressed his thanks to colleagues who have managed the extra challenge of balancing work and home responsibilities. Yet this was also a time to remember the colleagues we’ve lost to the pandemic.

To try to help communities cope, the Co-op partnered with FareShare and pledged £1.5m in donations to help them feed families around the UK as demand for foodbanks increased; instead of airing its 2020 Easter campaign, Co-op then boosted this amount with £2.5m in media budget. The Co-operate app launch has been brought forward to connect communities. Meanwhile, 700 Member Pioneers are doing great work right now to bring communities together; Steve plans for the Co-op to recruit another 300. He then thanked the Co-op Members’ Council for supporting the Member Pioneers scheme [I know some Council Members have also volunteered in stores where they can].

Shirine started by thanking Co-op colleagues across the business for all of their hard work at such a challenging time.

– Revenue growth is up by 7% mainly driven by Food, as Food sales have increased by 3%, and this is the 6th year of like for like growth.

– Food has developed 554 new products, including the Gro range, and has invested in improving a further 1,000. The Co-op has continued to extend its home delivery service, this expansion has come at the right time.

– While some historical accounting errors had been identified in relation to the acquisition of Nisa the finance team are working to fix them. The Nisa purchase has also seen Co-op products arrive into 5,000 new outlets in a capital-lite way.

– Funeralcare profits are down, but the Co-op remain dedicated to the business and its turn-around. The turn-around plan for Funeralcare will be adapted to take account of stresses Funeralcare colleagues are under.

– Legal is doing well across all areas including probate and family law, especially probate.

– Insurance is also going through a massive change as the potential sale of the underwriting business to Markerstudy goes through regulatory approval. Meanwhile, the Co-op are working with partners to offer products to meet member and customer needs.

– The Co-op Health app, which enables members and customers to get repeat prescriptions delivered to our doors, is certainly proving popular. Enquiries about the app from food stores have increased by 400%, while downloads of the app have trebled under lockdown.

– The Co-op is investing in schools as the number of Co-op Academy schools grows.

– It is impossible to predict the financial impact of Covid upon the Co-op right now, but it is estimated at £200-£275m of cost so far, hopefully offset by increased food sales. 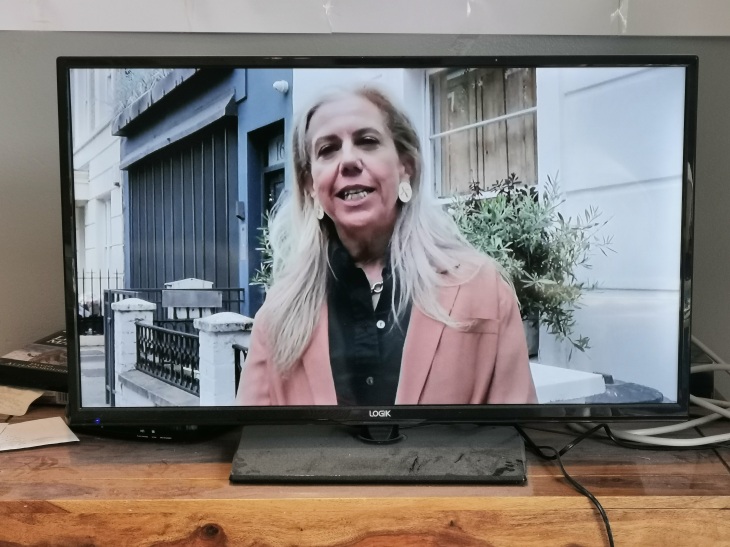 Stevie started by expressing her thanks to colleagues for their hard work during this crisis, especially those who had delivered food to her when she had the virus. Regarding executive pay, Stevie reported that Food CEO Jo’s pay’s gone up as she gained experience. Chief People and Services Officer, Helen Webb has also had a pay increase to reflect how the business values her role. New Chief Financial Officer, Shirine, is on less money than her predecessor as at the time of her hiring, the Co-op was going through a less turbulent time than when her predecessor was hired. Shirine has been given relocation expenses to move north. Meanwhile, colleague pay has been increased by 7% this year, which forms part of a total increase of 25% over the last 4 years. 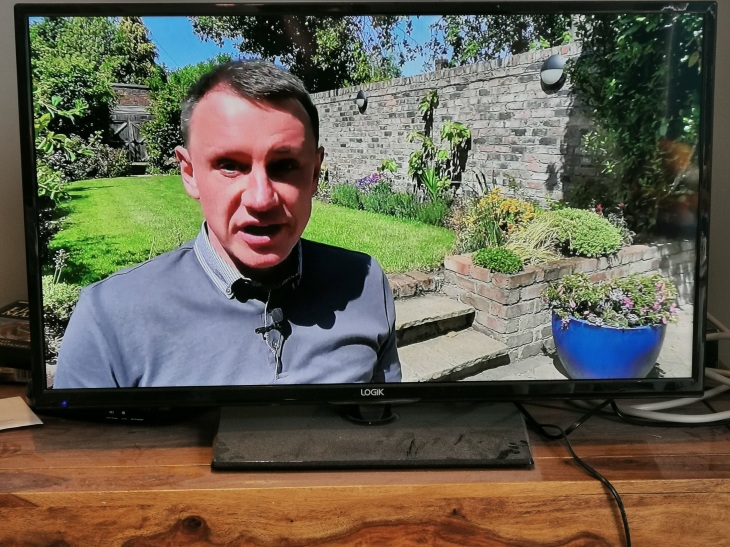 An uncharacteristically sombre Nick Crofts started his presentation by highlighting the significance of this pandemic, both for us as individuals and for the future of our Co-op as it copes with the crisis and looks beyond it. He then spoke of the ways in which the Co-op has been showing who we really are during this virus. A Co-op which has created a coronavirus fund, chosen to sell the Big Issue in our stores, launched the Co-operate app to bring communities together, and given-out free meal vouchers to feed disadvantaged children in our academy schools. He then thanked colleagues for their amazing work on the frontline, and Member Pioneers for their sterling efforts to support our communities.

Turning to the work of the Members’ Council, Nick described how Council has been championing the Safer Colleagues Safer Communities campaign; leading the letter-writing campaign to MPs, to lobby for the government to respond to colleagues’ submissions to the review on violence against shopworkers. He then described the success of our Join In opportunity which empowered 3,000 members to write to their MPs and call for action. Nick then described how the Members’ Council are continuing to work and offer constructive challenge to the Board during this crisis.

Whether we are mastering a new phone conference call system, voting on motions digitally, or using the new video conferencing system for the first time; we too are adapting and learning whatever we need to learn to keep representing members.

Nick then conveyed the Members’ Council’s wholehearted thank you to everyone who voted in the elections and AGM this year. He concluded by saying that co-operation works and will deliver a better future. The scientists I have heard from in my other job role (academic publishing) would go further and have been saying for weeks that the future of humanity depends on co-operation.

Because many of the executive couldn’t attend the AGM in person under lockdown restrictions, members were invited to submit their questions in advance; answers could then be sourced and recorded in advance too. The pre-recorded Q&A would then be followed by the answering of questions asked via YouTube. As the Q&A lasted around an hour, I’d really recommend that you watch the full session on YouTube to hear from members and Co-op directors, as we discussed a range of important topics; I’ve given you a quick summary below.

Pre-recorded questions and answers
The pre-recorded part of the session introduced us to more executives and their gardens, as well as enabling us to hear more from speakers who couldn’t be there in person, as they answered questions on:

For the next part of the Q&A we moved to the questions submitted during the AGM via YouTube, read by Assistant Members’ Council Secretary Adam (not pictured at any point during the Q&A, probably because the room he was in looked like this): 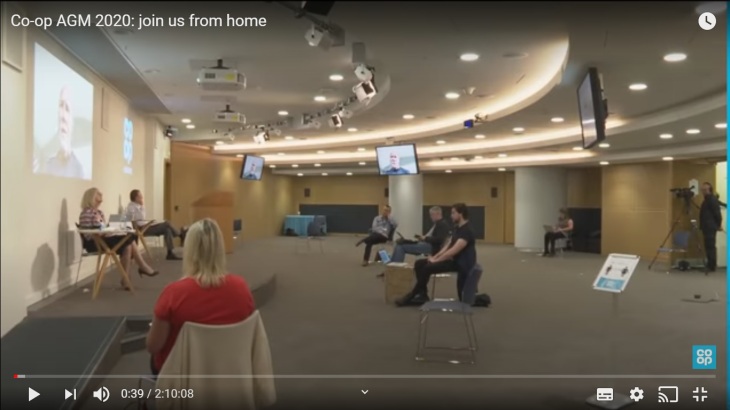 As a Members’ Council Member it would have been quite nice to see the fella; we would normally see our Secretariat at the meetings that would normally be happening at Angel Square, instead viewers got to listen to his disembodied voice reading their questions. Adam is the person in the middle of the room dressed all in black.

Members really seemed to enjoy having the chance to interact with each other on the AGM livestream and it sparked some interesting discussions and debate. It’s been an unprecedented but successful year for our Co-op, with our business achievements and growth allowing us to do amazing things in our communities. Members were keen to hear more about current and future plans, so here’s a look at what was covered in the Q&A:

Motion results and director election results
Motion results were announced provisionally at the time, but with only 20 votes yet to be counted; they have all now been confirmed. Motions 1-6 have passed, as have 7-12. Margaret Casely-Hayford has also been re-elected as a Member Nominated Director – congratulations Margaret!

With the passing of Motion 12, we have just proved that crowd-sourced Co-op motions can become a reality; people who took part in this opportunity, Council Members who voted this motion on to the ballot paper, Council President Nick Crofts for his encouragement, and everyone who voted to endorse this motion – we’ve all just changed what’s possible and created a new way to get members’ ideas on to the Co-op ballot paper! We’ve also taken a significant step forward for the environment which I’m looking forward to seeing progress. Just imagine the impact that we could have on the grocery retail sector if we can demonstrate through this research that climate change is business critical for every grocery retailer.

Conclusion with Chair Allan Leighton
Firstly, thank you colleagues and members for all you’ve done during a very difficult time.

There are 3 characteristics organisations and people will need in a new post-Covid world:

1. Resilience
Be resilient as individuals and as an organisation.

2. Bravery
Be brave in the face of these challenges.

3. Kindness
Has come back and we need to take this forward with us into our communities.

Be resilient, be brave, be kind, co-operate for a fairer world, and stay safe.

Final thoughts with CEO Steve Murrells
As lockdown is slowly starting to ease, we are emerging slowly from an exhausting time in our history. We need to turn neighbourliness into a norm rather than a crisis response. Shocks come hardest to the most vulnerable, this crisis has exposed inequality, and a new generation of workers are going to be badly hit by the recession to come. Supporting communities will not come from a standing start for us, we are already in communities. In future we will be judged by what we do now.

We need to stay agile. We have serious challenges ahead, less money for customers, less will be spent by us. This will not be easy, and social distancing will be with us for a long time. Our food business is going to have to adapt to changes as it is introducing delivery services. This was a good time to invest in Co-op Health. We’re going to have to become much more efficient. Protecting the environment and dealing with plastics are connected priorities. The economy is not just GDP, it is all of us. Co-operation needs to be business as usual; climate change, the economy, none of this can be achieved through a me-first attitude. Thank you for joining us, thank you for choosing a fairer way of doing business, and thank you for Co-operating for a fairer world.