It is my second year on the Members’ Council, my first as a fully-elected Member, and while our relationship with those running the business will always be evolving, something rather exciting is happening.

Strategy 1 – New Opportunities
My experience of the November Members’ Council Meeting started with attending the New Opportunities Advisory Team. These meetings are exciting because they involve the opportunity to provide input and feedback on potential developments in our businesses. These opportunities start with an explanation of the research which has led to the decision to trial a potential new business venture. Colleagues then invite us to ask questions and suggest new ideas.

The previous new venture we were able to influence through our questions and ideas was Co-op Health. When I suggested a new product for consideration in November, the team looked excited and described how my idea would fit into their business model; so I’m keeping my fingers crossed that the idea may one day become a real product for their business. As a group, we also asked questions about Values and Principles, as well as legislation that may affect the new developments.

Strategy 2 – Reading up for Saturday
After the meeting I had some downtime, which I used to do some reading for the full meeting on the following day. After reading and noting my views upon each Council paper, I then worked my way through a series of strategy-related articles, papers, and videos that the Executive had conveyed to us all via email. These sources were completely unlike anything the Executive had sent us before, at least while I’ve been on Council. The sources explored a wide range of themes, each of which was influencing the Executive’s current thinking. 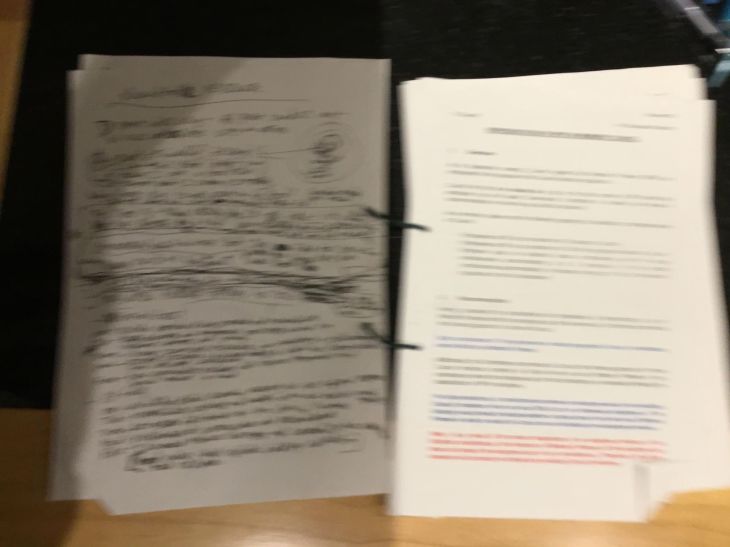 Areas covered included relationship between businesses and the world around them, and likely changes to what customers will want from businesses in the future. The obvious implication of these pre-reads was that they could be applied to the Co-op’s future. The exciting part was thinking about how they could be applied. As I write, I’m looking at the back of my Council Meeting papers; they are covered with notes upon the messages our Executive chose to share with us through these pre-reads and how they might apply to the Co-op. Through this task, the Executive have meaningfully engaged with us as intelligent people and it feels pretty wonderful.

Strategy 3 – The Saturday meeting strategy session
On the Saturday morning, the discussion upon strategy started with an introduction from the Co-op Group Chair, Allan Leighton. He gave us a whistle stop tour of how each of the businesses is doing and what the Group are currently working on, as well as how they support other co-operative businesses.

Next up, CEO, Steve Murrells, took the stage to share some highlights with us, and we had the chance to unleash some of the ideas generated by the pre-reads with him. The exciting part for me, personally, was getting to ask CEO, Steve Murrells, a question on how he was applying an idea (suggested by one of the pre-read sources) to the overall vision for the future of the Co-op. Answers came from both Steve and 2 other directors, which enabled us all to hear a variety of perspectives.

Many other Council Members had questions for Steve too and they included whether we had been at the forefront of the response to the Doncaster flooding, helping the emergency services – yes, we had. If we had plans to celebrate our 175th anniversary – yes, but our future is taking priority. Tougher questions included:  help for stores who were having a tougher time, how to raise our profile, and communication with customer members when stores close.

Strategy 4 – Strategic decision making
The Saturday morning session on strategy would also see Council Members given a window into the world of Executive decision-making via a board game in the spirit of Christmas. The Council was split into groups and each group were asked to work individually and then together to decide which business priorities they would choose to invest in.

The thing that made the game so challenging was that there wasn’t enough money to do all of the good things we wanted to do. In order to raise enough cash to spend on our priorities, we also had to make tough choices to increase the amount of money available. Fortunately, with thoughtful leadership from Council Vice-President Bev Perkins, the team I was on were able to make fictional choices we could all live with. We heard feedback from a number of groups hearing the areas of shared priorities as well as those where there were different views.

Co-op Funeralcare
The next session was on Co-op Funeralcare and we learned a lot from the new Managing Director for Funeralcare, Sam Tyrer. Sam shared her thoughts on the Funeralcare business and her plans for the future and was joined by her colleagues Rachel Woodman and Alison Close. 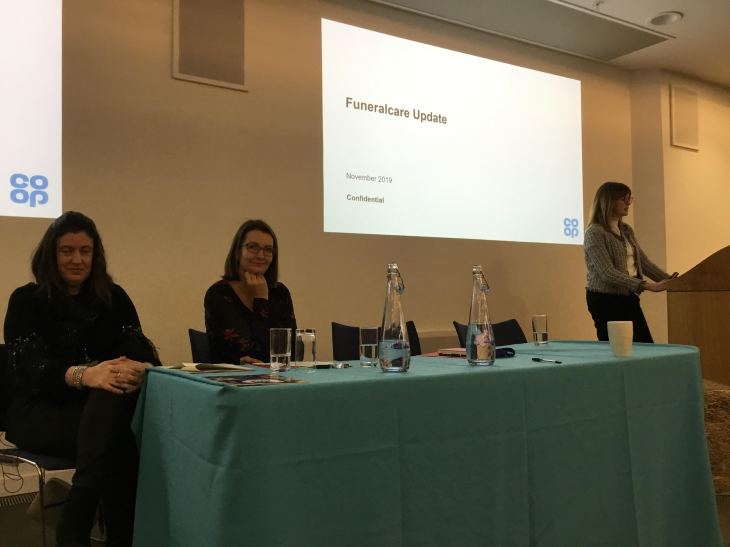 Thankfully, this new Managing Director of Funeralcare isn’t afraid to tell us about areas which can be improved upon. I’m sure most readers will recall that ‘A New Hope’ was the start of a certain journey and not the end. Questions included the subjects of: pricing, marketing presence, more information in advance of the meeting, and changes to Funeralcare in Northern Ireland.

Directors Forum Part 1
This part of the meeting was the forum for committees’ questions to be posed to directors and our first opportunity to hear from new Member Nominated Director, Sarah McCarthy-Fry.

When the Ethics and Sustainability Committee asked about plastic waste they were told this problem is not as simple as it seems. If plastic use is reduced in some products then this may significantly increase food waste, meaning more food needs to be produced and greater CO2 emissions. As a follow-up question, a committee member asked if we were looking to develop more environmentally-friendly solutions to this situation. We were told that indeed the Co-op is doing things in this regard.

Other areas that were raised included: the Markerstudy purchase of the Insurance underwriting business, the Member Value proposition, encouraging more members to join the Co-op, and the progress of Co-op Health. The balance of staffed checkouts versus self-service tills was also discussed.

Directors Forum Part 2
For the small-group discussion where all Council Members could ask questions, I was in a group with Member Nominated Director, Paul Chandler (second from the left in the picture above). One of our more mild-mannered directors at major events like the AGM, in a smallish-group setting, his in-depth knowledge of the business and willingness to actively engage with our questions really shone through. Subjects raised with Paul ranged from employment hours and recruitment to community engagement, debt bond renewal, and how to explain what we’re doing to environmental groups.

Council Secretary Vote
After around a year of working as the Acting Council Secretary, the Members’ Council were delighted to unanimously vote for Andrew Seddon to be our new Council Secretary and first point of contact for the rest of the business. It was slightly surreal to be sitting in the room hearing Council Members endorse him while the Secretariat waited outside nervously with him.

Andrew kept his thank you speech short and sweet, starting by commenting that we were slightly behind schedule; it’s not often that people start doing their new job with the first line of their acceptance speech. Good luck, Andrew Seddon.

Your ideas
The Members’ Council meeting concluded with Council President, Nick Crofts, inviting Council to submit their ideas for AGM motion themes by the end of December. Of course, just sitting down and deciding what you should vote on is not my style, so I am looking to see if I can submit some Members’ ideas as well.

Part 1 – If you would like to suggest something the Co-op, as a multi-billion-pound business, could do to change the world; please email your ideas to thecooprose@gmail.com by Sunday 29th December.

Part 2 – I’ve spoken to a lovely senior member of the Join-In team who has said he’ll do his best to send me data from the Leeds #JoinInLive event that I chaired, so that I can submit Members ideas from that event too.

Of course submission doesn’t guarantee that an idea will go forward to the AGM, I don’t have that kind of power, but the idea that is submitted has a far better chance than the idea stuck in your head – please think big, let’s unleash the power of members’ ideas!